(Houston, TX) January 18, 2020—The Greater Houston Builders Association named Chesmar Homes its 2019 Builder of the Year at the organization’s annual presidential installation. The gala event was hosted Saturday, January 18 at The Briar Club.  This is the second time in the company’s history that it has received this honor.

Chesmar Homes is a privately owned production homebuilder founded in Houston in 2005, by industry leader, Don Klein. Since then, Chesmar has grown to include operations in San Antonio, Austin and Dallas and employs almost 300 associates.  The company, about to celebrate its 15th year of operation, also received the honor in 2008.

Chesmar’s participation with the GHBA has been significant throughout its history.  Of special interest to Chesmar and its associates is the Benefit Home Project, for which the company has built six homes. A portion of the proceeds from the sale of each Benefit Project home goes to support worthwhile charities like HomeAid Houston and Operation Finally Home.

CEO Don Klein, Houston City President Scott Merovitch and a host of Chesmarians were in attendance to witness the surprise recognition.  “We can’t begin to express our gratitude to the folks at the GHBA”, stated Merovitch.  “We are just so excited to be here doing what we love every day.  Then to be named Builder of the Year twice in our history–that’s a lot to celebrate for a company in existence just shy of 15 years!” 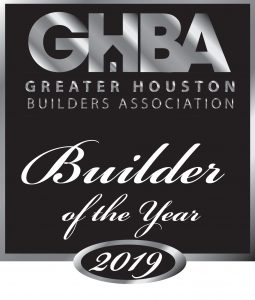