The Rise of the Open Floorplan 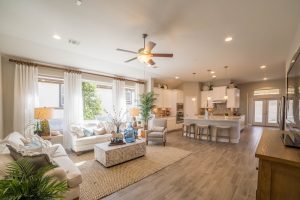 Homes are reflections of their times just as much as any car model or fashion trend. At Chesmar, the residences we build feature the latest in energy-efficient design, safety features, and modern conveniences such as cable-ready outlets, sprinkler systems, kitchen islands, and much more. Perhaps their biggest nod to modern sensibilities is their open floorplans. All of our models are designed to give families a living space that is bright, airy, and flexible enough to meet both their current and future needs.

A Place for Everything, and Everything in its Place

But while open floorplans are now common, it hasn’t always been that way. Before World War II, formality was the norm. People would dress in suits and evening attire to attend movies. Manners and etiquette were the foundation of social decorum. Correct posture was considered a reflection of good upbringing. And everything had its proper place, from hats to galoshes, bread bins to dust bins. The layout of homes prior to the 1940s was heavily influenced by this sense of compartmentalization. There was a designated room for dining, entertaining, reading, and of course, bathing and sleeping. Hallways and archways connected one section of the house to the other.

Although it was perfectly adequate for homeowners at the time, many would consider floorplans of yesteryear to be counterintuitive. Take the kitchen, for example. It may be hard to believe in today’s era when food preparation is often an activity happily shared with both family and friends, but there was a time when the kitchen was considered off-limits to guests, which is why it was so often located at the very back of the house, as far from the formal living room as possible!

When the Walls Began to Come Down

After the war, things began to change. Improved construction techniques and building materials reduced the number of needed support structures, which were often the load-bearing walls separating one room from the next. What’s more, societal attitudes began to shift. Traditional formality was giving way to more relaxed and casual sensibilities. And millions of former soldiers were starting families. Young children needed a space to play, study, and interact with siblings under the watchful eye of a parent (usually mom). That’s hard to do from a kitchen walled off from the rest of the house, which is why the full partition between the dining room and kitchen was the first to go, first becoming a half-wall or bar counter, then disappearing altogether.

From there, the open floorplan began to expand. The kitchen/dining area became the kitchen/dining/living room, also known as the great room. Oftentimes, a short flight of steps served as a differentiator between the dining and living areas, or perhaps a large fireplace. This was a very common configuration from the 50s through to the early 80s and is today referred to as Mid Century Modern design. The “Brady Bunch” house is probably the best-known example of this style.

The Future is Open

By the 1990s, open floorplans were pretty much the standard for new homes and are today considered a highly desirable feature, adding value to any property on the market. In fact, converting a partitioned home into a more open design is one of the most popular renovations made by house flippers. The advice to “knock down that wall” can be heard in nearly every episode of popular shows such as “Property Brothers,” “Flip or Flop,” and “Fixer Upper”.

In addition to improved resale value, other benefits of an open home design include:

Thresholds can be bottlenecks, especially during dinnertimes or when the kids are rushing around getting ready for school. Fewer walls mean fewer traffic conflicts, near collisions, or head-on encounters.

By eliminating walls, natural illumination from exterior windows can fill the space, reducing the need for artificial lighting. Increased exposure to natural light has also been shown to elevate mood, improve concentration, and ease eye strain.

As previously stated, open floor plans reduce the number of thresholds within a home. This can be a big advantage for homeowners who plan to age in place, as it makes navigation easier for individuals using mobility devices such as walkers, wheelchairs, and scooters.

At Chesmar, we’re proud of the wide variety of single-family homes and townhomes we’re building in burgeoning neighborhoods throughout Dallas, Houston, Austin, and San Antonio. If you’re in the market for a new home and would like to learn more about our models, click through our website, visit any of our communities, or contact one of our friendly New Home Consultants today.